The winners and losers of peak season 2017

Whose 2017 peak season rocked and whose flopped? Every year peak season seems to be the biggest ever, but keeping up with this success is not a given. Let’s cast our minds back to last year and see where sales soared and where they slumped. Here are some of the winners and losers of peak season 2017.

No surprises here, after all they are the ones who started Black Friday in Europe. The e-commerce giants dominated Black Friday and Cyber Monday sales again, but by just how much? Well the answer is sure to blow you away. According to information from Hitwise, which was published on Dealerscope a whopping 54.9% of Black Friday transactions were made on the Amazon website.

Fashion brand Boohoo were screaming woo-hoo at the end of peak season 2017. In the last four months of the year Boohoo saw their sales double to £228 million. Boohoo are a purely online brand and are based in the UK, but operate internationally. Boohoo took part in all the big retail events including opening their pre-sale a few days before Black Friday itself. Over Black Friday and their Grey November pre-sale, Boohoo discounted many items by 30-60%. Boohoo also took part in the UK’s traditional Boxing Day sales where they took 25% off everything, even items that were already discounted.

The electronics retailer, which is based in the Netherlands reported some seriously cool sales increases during last year’s peak season period. Cool Blue have said that in peak season 2017 they received 40% more sales than on their busiest day in 2016.

Cool Blue shunned the traditional Black Friday in favour of their own Blue Friday. Check out our five brands offering a Black Friday alternative blog post for more information.

Clothing retailer Fat Face reported a 12% increase in peak season sales last year. What is particularly interesting is that Fat Face refused to discount their stock pre-Christmas and shunned Black Friday altogether. The UK-based brand posted on their social media channels that they think Black Friday is “pretty bonkers” and promised to wait until at least Christmas Eve to reduce their prices, which is inline with the UK’s traditional Boxing Day sales. Fat Face have shown that they can still have a successful peak season even without Black Friday.

Online sales boosted UK-based retailer Next. With their website bringing a 13.6% rise in sales in the 54 days leading up to Christmas compared to the 6.1% decline in store sales, the retailer had an positive peak season 2017 overall. Next fully embraced Black Friday and even had a dedicated page on their website and offered early online access to their VIP customers.

Another British department store in trouble during peak season 2017 was Debenhams. The department store announced that their post-Christmas sales were lower than expected and even though they marked down a number of items they couldn’t shift all their stock. Their Black Friday discounts started on November 20th a few days before Black Friday itself. This is becoming more common practice among retailers who want to attract shoppers before their competitors.

British retailers M&S saw sales slide by 1.4% in the six weeks leading up to Christmas compared to the same period in 2016. Marks and Spencer did not take part in Black Friday 2017 although they did have a number of winter offers throughout the month in store such as 50% off selected gift sets. Marks and Spencer did take part in the Boxing Day sales, which were available online from 5pm on Christmas Eve and in store on Boxing Day itself. All in all peak season 2017 was not their greatest performance.

There was no Christmas joy for Mothercare in peak season 2017. Sales slid for the early years retailer by 7.2% during the peak season compared to the same period in 2016. Mothercare took part in all the major peak season discounting events including Black Friday, Cyber Monday and Boxing Day. Although during these periods sales surged, their overall numbers for peak season were down.

While peak season spending is definitely on the increase, not every retailer is able to cash in on this success. Some retailers find ignoring peak season sale events to be beneficial. However other retailers rely on the surge in spending on these days to boost their overall revenue. Only you know what is the right direction for your brand, but we are sure that there will continue to be retailers reporting both soaring and slumping sales during this year’s peak season.

Then look no further than this month’s webinar. We will be talking all things peak season planning, including the seven ways that you can boost your sales this peak season. Let’s make this your best year yet! 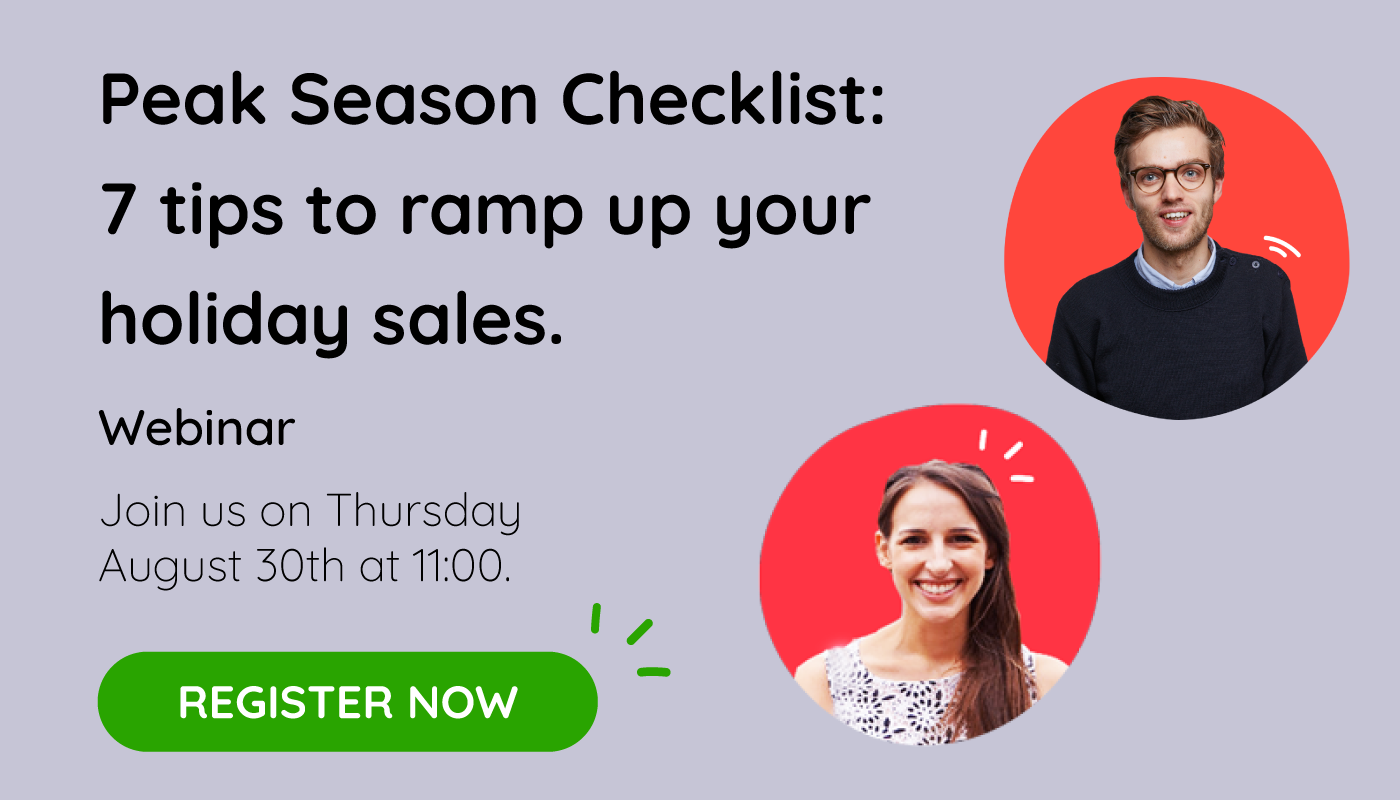 The anatomy of an e-commerce track and trace email